Once upon a time, there was beautiful, hard working twenty-something year young maiden who traveled to the mysterious and far East land of Hong Kong. The wealthy King Morgan Stanley promised her a rich and prosperous career in trading fine goods to the neighboring kingdoms. Day turned into night and night turned into day and the young maiden made her small fortune as promised by the King. Unfortunately, the young maiden had neglected to take care of oneself. Her home was dirty, her embroidered dresses were torn to tatters, and her late night dancing and feasting caused her once porcelain skin to gray and sag.   One late evening, the maiden returned home to her cottage alongside the palace bay. When she walked in, she was surprised to see her cottage was spotless, her silk dresses were washed and pressed, and a perfectly proportioned cooked meal was prepared. A fairy godmother, also known as an Ayie in the Orient East, tip-toed into her home during the day to cook, clean and cut her fresh fruit. And from that day forward, because of the care of her fairy godmother, Ayie, the young maiden’s beauty returned and she lived happily ever after. 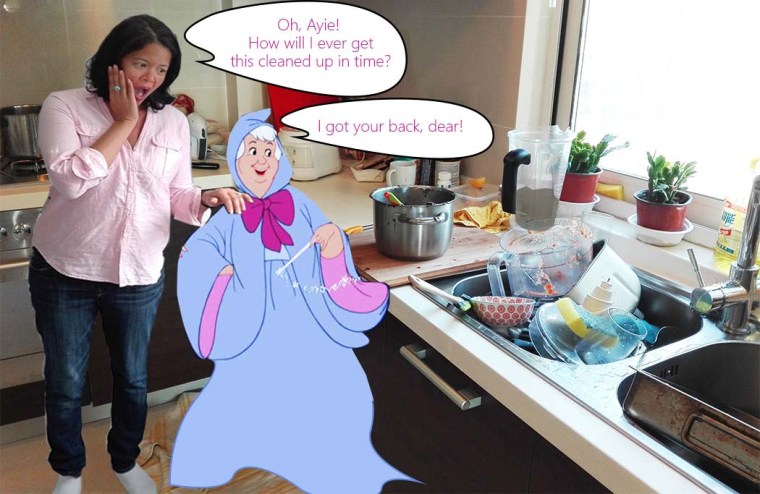 Ten years ago, I had just moved to a new city in the States, knew nobody, was trying to keep up with my business, had a toddler in day care, another baby on the way, morning sickness was morning-day-and-night, and a hubby who traveled months at a time. While I barely able to keep my head above water, a friend of mine moved to Hong Kong. She would email me stories of this mystical lady called ‘Ayie’ who would cook, clean and cut her fruit. When Hubby broke the news of our upcoming move to China, I dreamt of waking up in the fresh mornings to a glorious bowl of cut fruit. 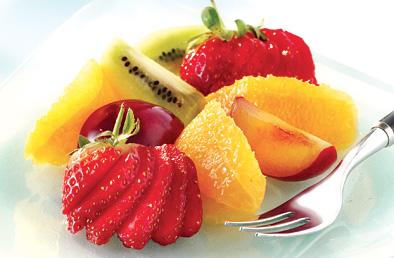 So when we arrived in China – the search began. Six years and 3 China cities later, I’ve had over 13 Ayies, some lasting several years. Whattt? You ask? But the math doesn’t make sense? Ok… I admit it. Sometimes I had more than 1 ayie working at the same time. Even as many as 3 since I was still working when we first moved to China.

And yes, I really must say it was really REALLY nice and a huge load off our marriage and the China move, which was hard enough.

When we moved to Qingdao, I had to once again search for an Ayie. I asked all the expats if they knew of any good Ayies and wrote several ads in Qingdao mamas. One quit after a day, one asked for double her rate, one told me she was out of work for 2 years but would only accept 75 rmb/hour. And one complained the minute she arrived on how dirty the kitchen and floors were. She lasted 2 weeks. Finally, I met my neighbor and asked her if she knew of any available Ayies. And, luckily, she did. 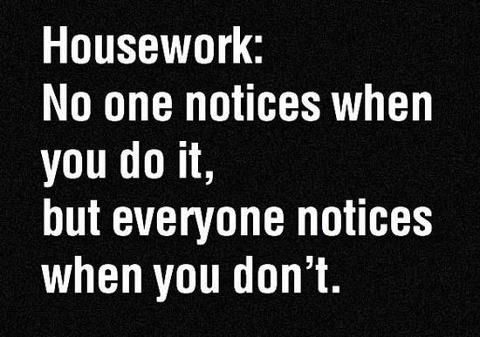 Should I get an Ayie?

For me, living in China is hard enough, especially with the language barrier. So a little help during the day to give you some peace, help order your water bottles, keep on eye on the kids, and handle the clean-up grind is a very nice break. Also, having the Ayie watch the kids at night is a nice break! I can actually date my Hubby here or go out with friends at night to a party or a bar without having to pay $50-$100 USD a night on a babysitter! If you can get over the initial weirdness of having someone lingering in your house, then by all means, get an Ayie.

So…how do I find one?

First, ask all the expats you know and meet. It’s always helpful to have references.

Ask Chinese people that you know and meet –Drivers you use, other Ayie’s, your tutor, and like for me – ask your neighbors.

So here’s the low down on the rate. As usual, Expats usually pay more, but I wanted to pay what was fair and market value.

From 2009 -2015, during the day we paid 15 rmb/hour. For nighttime babysitting, I’d pay 20 rmb/hour + transport home. At these times, we were living in very small towns (by China standards)– Danshui (2 hours from Shenzhen) and Haiyang (2 hours from Qingdao). Of course, in the bigger cities, you will be expected to pay more due to cost of living.

When I was looking for Ayies in Qingdao, several of them would give me a flat rate, around 100 rmb (@ $16 USD) per day. However, I always wanted to know how many hours that was per day. At 100 rmb a pop, my expectation was at least 4 hours, but for some that meant 1-2 hours. In my opinion, a flat fee rate eventually leads to misunderstandings, confusion, and another Ayie that bites the dust. The hourly rate for my current Ayie in Qingdao is 25 rmb/hour. She doesn’t cook, cut fruit, or do laundry. She strictly cleans, and cleans well, and I am totally fine with that.

Get used to it, it’ll happen

One thing you’ll have to get used to is that the Chinese don’t usually have the same standards as Westerners. You probably already noticed in China – spitting on the street, kids peeing right on the floors in grocery stores, an ambivalence to personal space. But it’s important to remember what is obvious to us, might not to be them. Case in point: I had to brand, ingrain, and emphasize repeatedly to one of my the Ayies to NOT use the same rag she used on the sink as on the toilets. And in the bathroom as in the kitchen. And on the floors as tables. Etc, etc, etc. I’d (try) be light-hearted and silly about it when I’d check, but made clear it was of utmost importance.

Once one of my Ayie’s had terrible body odor. So like any well-integrated Westerner in China, I made my Chinese friend tell her. She pulled her aside and told her that since she was taking care of kids, she had to shower and use deodorant, everyday. Oblivious, the Ayie innocently answered her, “sure no problem! What’s deodorant?” So my friend explained to her how to use it.

There will be times they will overstep the boundaries – walking into my bedroom without knocking or even being so honest to tell me, “You’ve gained weight while on vacation!”  But it’s a give or take – If you really like your Ayie, then try to work with her to make her understand your expectations. You may have to clean with her for a while for her to understand, but if she gets it, it’ll be worth it!

This is NOT the Chinese version of “ The Help”!

Please do not get all Miss Hilly Holbrook on your Ayie! You never know… 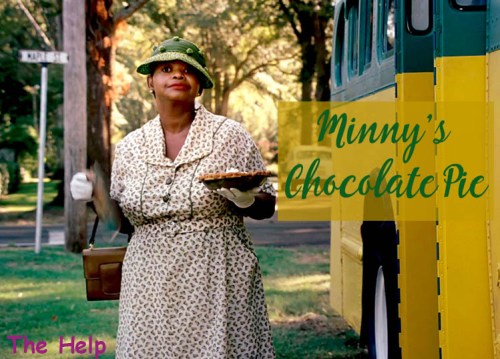 I saw it happen too often, where suddenly the Expat transforms into the “Madame” and the “Ayie” is treated like a servant. One of my Ayie’s complained about a fellow expat being too strict. If she was 10 mins late, she was docked no matter what (even if she stayed 10 mins later). The 3 rmb ($.50 USD) is pennies for us but it’s a lot for her. She was rated on her service at the end of the month – if she did well, she got her salary. If she didn’t, then she was also docked. Another time an Expat called me to complain about every little thing that annoyed her about the Ayie. I explained that at 20 rmb per hour (@ $3.20 USD), you have to have some expectation that you get what you pay for. I suggested her getting one with experience with Western families, but she’d probably have to pay 50% more.

Believe me, I’ve screwed up on my end as well. Once, my Ayie told me “Bù hǎo,Bù hǎo!” or that it was bad when I put my daughter in the corner when she was naughty. I was pissed, and told her it wasn’t any of her business. And even though I still believe it wasn’t any of her business, I could have been nicer. The next day, I had my Chinese teacher teach me how to say, “I’m sorry I was angry with you yesterday, and I lost my temper. You may not agree, but this is my way of disciplining my children. I hope you understand.” She was completely shocked I explained and apologized. From there she respected me as a parent and our cultural differences.

One thing I think is important is paying her during our vacation time. If we go on vacation, she should still get paid the same rate even if she doesn’t need to come as frequently. It’s not her fault that were go on vacation and she shouldn’t lose her pay because of it. I also didn’t want her to find work elsewhere. As long as the house is clean upon our return, I’m happy. 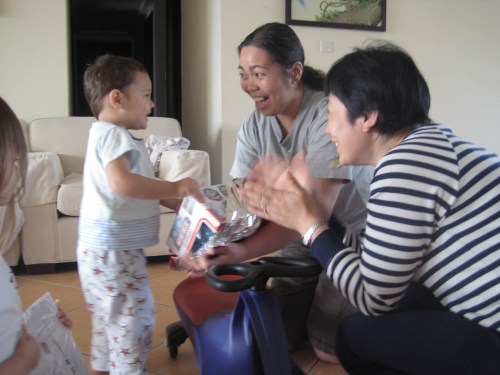 For me one of the major pluses in living in China is having an Ayie.  They have had have been a huge part of our experience in China and a major help in adjusting to life here.   If you have any stories or advice on having an Ayie, please comment below!

2 thoughts on “Looking for an Ayie in China”